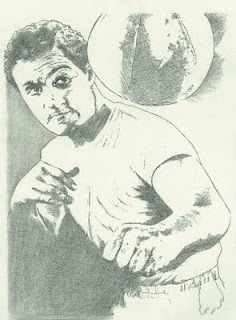 “Everyone is giving things to the library!” Artist and Rocky Marciano admirer Joe Gemellaro drove a couple of hours from his home to Brockton with his original sketch and the first in a series of prints of it, of Rocky, the Brockton Bomber. I thought we were going to discuss the possibility of his donating it to the library. Instead he signed the Certificate of Authenticity and gave it to me on the spot. I promised to have it matted and framed professionally, and to invite him down for a photo shoot and press release when we officially unveil it.

As Joe and I were completing a tour of the library’s many art treasures, Custodian Ed said someone at the Circulation Desk wanted to speak with me. Was it a patron with a complaint? NO! It was author Fred George from the nearby town of Pembroke wanting to donate a copy of his recently published book for our collection. Well, not donate really, but I was happy to pay the very reasonable cover price from my pocket in order to make it happen and get a copy inscribed “To the People of Brockton.” The book, Switched at Birth: My Life in Someone Else’s World, tells how he discovered his true identity at age 57, via DNA testing. The Patriot Ledger wrote about it, with his picture, and comments on his story at SWITCHED AT BIRTH

All of this before lunch. How interesting it is to be the face of the public library!
Posted by Harry at 1:30 PM