Thanks to Seth Godin and N. M. Kelby

I read The Constant Art of Being a Writer: The Life, Art and Business of Fiction by N. M. Kelby because Seth Godin writes on the back cover, “Don’t wait, don’t stall, don’t browse. Buy a copy right now.” Being a librarian who can get most books free – as well as being thrifty to the extreme - but who has purchased both books and CDs by Godin, I had to devour it. The reader is rewarded with a lot of insights including how to use social networking. I applaud her efforts to help you sell what you write while never letting you forget that the writing is an act unto itself and worthy of your dedication, whatever the number of your readers.
Posted by Harry at 3:43 PM No comments:

Let Trustees Do Their Job!

As I was about to leave for today’s SEMLS meeting (where we voted to merge with the other Regions to morph into the Massachusetts Library System while bemoaning our colleagues’ job losses) Ruth Kowal of Boston Public Library called to ask me to help fight the Senate amendments to the State Budget that would deny State Aid and Library of Last Recourse funding if Boston closed or reduced staffing at any Branch.

Ruth said a further amendment would make this proposal more “fair” by including any library with Branches. I told her I would spread the word to my SEMLS colleagues at the meeting, and Cindy Roach announced it from the podium. (We’ll miss you, Cindy!)

I then wrote to Brockton’s State Senator Thomas Kennedy thanking him for proposing an amendment to increase the amount of State Aid, and asking him to help fight the Branch related amendments. Decisions on how to best utilize the limited resources are best made by local Boards of Library Trustees who are entrusted to serve the needs of local constituents!
Posted by Harry at 9:03 PM No comments:

A Prescription For Serenity


My rating: 5 of 5 stars
On March 18, 2010, I posted on FaceBook, and on this blog, “Harry’s Invocation For Brockton Rotary.” The key sentence was, “The most powerful four words, the shortest prayer and most challenging statement of faith, the crux of the Lord’s Prayer, for me, is ‘Thy Will Be Done.’” Imagine my delight, reading Vitale’s inspirational paean to Barnum, with his description on page 146 of finding Barnum’s “tiny, unadorned headstone… And on the front of it, still legible after over 100 years, was the phrase Barnum loved: “Not my will, but thine, be done.” This is another book that I put aside, not posting because it contained so many quotes I wanted to share. This one suffices. I thoroughly enjoyed this book. 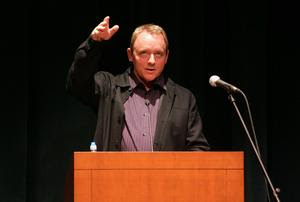 Congratulations to Elizabeth "Betsy" Wolfe, Library Director at the Thayer Public Library, for bringing this charming author to Braintree and introducing him on the stage at Thayer Academy. See if you think he looks like Anthony Hopkins as Hannibal Lector. Throughout the talk I couldn't make the connection, because the resemblance was physical only. Lehane was witty and entertaining and very real and down to earth. Wife Jody and I both enjoyed this tremendously and the hour and a half flew by. Thank you, Betsy!
'Shutter Island' author Dennis Lehane speaks to Braintree audience - Quincy, MA - The Patriot Ledger

Posted using ShareThis
Posted by Harry at 7:52 AM No comments: