I was delighted to see the work of Mary Diggle and the Literacy Volunteers of Massachusetts/Quincy recognized, and excited to see the Thomas Crane Public Library highlighted as partner and supporter of this priceless work, in today's Boston Globe article below.

As Library Director in urban libraries serving "Gateway Communities," with large numbers of immigrants, along with native-born non-readers, our usefulness to the communities was multiplied by hosting and promoting Literacy Volunteers. Public Libraries truly are the home of "The American Dream."

This was especially true at the Jacob Edwards Library in Southbridge, MA, the Brockton Public Library, and as demonstrated in the article below, the Thomas Crane Public Library in Quincy, where I finished my public library career.

For some adults, Literacy Volunteers of Massachusetts fills a void

QUINCY — For the first 50 years of his life, Paulo Ramos simply got by.

He relied on universal symbols, committed the visual makeup of certain essential words to memory, and copied by rote letters and numbers that friends assembled for him.

Caption: Paulo Ramos uses a mirror to watch his lips as he speaks at Quincy’s Thomas Crane Library.

But even as the Weymouth resident held down various jobs and eventually went on to run his own cleaning business, the extent of his literacy was being able to pen his own signature.

He had never read a book or newspaper, and had never sat down to write a friend or family member a letter or e-mail. 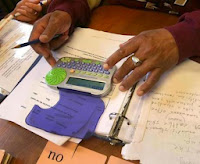 “When I started, I was nothing,” the 54-year-old Cape Verde native said of his first session with a literacy tutor in Quincy four years ago. “I [had] just learned to sign my name.”

You are probably reading this story without even thinking about it. You have no need to sound out the vowels and consonants, consult a dictionary, or puzzle over context.

Caption: Paulo Ramos uses a small device that sounds out words as he practices his English.

What you may not realize is that, reading these words — as simple as it may be for you — can be a confounding and incapacitating task for many adults in this country.

This is where the nonprofit Literacy Volunteers of Massachusetts-Quincy fills a void; for more than a quarter century, the program based at Thomas Crane Public Library has enabled hundreds of locals like Ramos to acquire the reading and writing skills that many of us take for granted.

Part of a statewide network of more than a dozen such programs — including in Stoughton, Norwood, Framingham, Lowell, and Methuen — the nonprofit offers free, confidential, one-on-one tutoring to adults at or below a sixth-grade reading level. Individualized tutoring focuses on basic literacy or English as a Second Language. There can often be a waiting list, depending on the number of tutors available. The only requirements for prospective students are that they are over age 16, not enrolled in school, and have the ability to make a regular commitment of two hours a week.

Caption: Carol O’Neill and Caitlin Castello Greene of Literacy Volunteers of Massachusetts-Quincy discuss teaching a student how to read.

The Quincy program was established 28 years ago, according to Mary Diggle, the program’s project manager, and assists between 70 and 100 students a year with reading and writing comprehension.

“It’s life-changing,” said Mary Kelly, a part-time reading teacher from Quincy who has worked with Ramos the past four years.

And not just for the student. “You get more than you give,” she said as she sat in a private reading room at the Crane library during a recent weekly session.

According to a recent study by the US Department of Education and the National Institute of Literacy, more than 30 million, or 14 percent, of US adults cannot read, while 21 percent of US adults read at below a fifth-grade level.

This is due to a number of factors, explained Diggle. American-born students may have simply dropped out of primary or high school, lacked educational opportunities while growing up, or are afflicted with learning disabilities that were never identified or mitigated. Immigrant students, meanwhile, may have been denied access to school due to the atrocities of war or poverty, and, upon entering the United States, may have learned to adequately speak English, but not to write or read the language.

According to Diggle, 68 pairs of tutors and students from the Quincy area are working together; students are often age 50 or older and seek assistance due to work barriers, or simply because they crave the opportunity to read to their grandchildren.

Tutors, meanwhile, are retired or practicing teachers like Kelly or people who simply say, “I love reading and can’t imagine not knowing how to,” Diggle explained.

Always in demand, their only qualifications, Diggle said, are a passion for reading, sensitivity, and an ability to work in diverse groups. They initially go through an orientation, as well as six three-hour training workshops focused on techniques, materials, and lesson planning. The next tutor orientation is scheduled to be held on Jan. 26, according to Diggle.

When Kelly and Ramos were paired up four years ago, they started with the basics: the ABCs.

During a recent weekday morning session, they worked on word drills, various iterations of letters, and full sentences on word cards. Clad in Boston College paraphernalia, Ramos used his finger to keep place and, when stuck, took off his glasses and lowered his face within inches of the pesky word.

“Look at that again,” Kelly prompted. “Pause, take a breath.”

“What does it mean to startle you?”

Ramos turned to his small hand-held electronic Franklin Speller machine, looked it up, and read the definition aloud: “A sudden shock of surprise or alarm.” 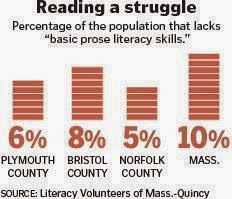 He continued with a series of random sentences.

“He was the proud owner of a Basset hound.”

“We will have clam chowder in a cup for dinner.”

“Do not slouch on the couch.”

Born to farm-working parents, Ramos recalled that he attended school occasionally — for a duration of two to three years, he estimated, but not every day, because work at home took precedence. He never learned to read or write in his native Portuguese, and, when he came to the United States, he learned to speak English phonetically and held down a series of low-wage jobs.

Finally, when a back injury put him out of work a few years ago, he decided to do something about his illiteracy.

“I thought, ‘I’d like to read, to see what’s going on, to use my mind,’ ” he said in a thick Portuguese accent.

He has proved to be a star pupil, developing a voraciousness for reading; he picks up anything, from discarded scraps of paper to health care brochures, to newspapers, and, more recently, young adult books, including a biography of Babe Ruth (he wrote a book report on that) and Kate DiCamillo’s novel “Because of Winn-Dixie.”

“He comes in with anything he finds lying around,” said Kelly. “He’s soaking up everything.”

“Every day I get better and better with my reading,” he said, affirming that, “if you want something, you work hard for it. Nobody can do it for you.”

To download an application and find out more details, visit http://thomascranelibrary.org/read. Visit Literacy Volunteers of Massachusetts at http://www.lvm.org.

Taryn Plumb can be reached at tarynplumb1@gmail.com.
Posted by Harry at 12:07 PM