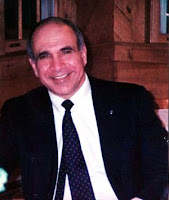 This article by Vicki-Ann Downing was in The Enterprise on December 9th. I tried to share it to Facebook but a "floating" advertisement covered the link so I used the barely-visible Blogger link, which only sends the link above, then copied and pasted the text of the article, and the photo, below.

BROCKTON — Ernest J. Webby Jr., former city library director, was one of three recipients of a prestigious national award given to people who volunteer at presidential libraries.

Webby, 71, was nominated because of his volunteer work at the John F. Kennedy Presidential Library and Museum in Dorchester. The award said he showed “ingenuity and achievement in establishing a program to enhance Web resources.”

A volunteer in the research room, Webby has overseen an effort to publish on the museum’s website all of Kennedy’s speeches, especially those given during the 1960 presidential election campaign.

“Ernest Webby has created and managed a program of mass cooperation for the production of electronic resources to be published on the John F. Kennedy Library’s website,” according to the awards program.

“Using both old and new methods of communication, Ernest has overseen the work of a large, far-flung and constantly changing group of ‘virtual volunteers.’ His project has developed electronic documents that have been used to support other library programs, but he has also produced a new community of individuals directly invested in the library’s goal of providing access to historical materials.”

In addition to volunteering one day a week at the Kennedy library, Webby works part-time at the Newton Free Library, his wife said.

He received a clock as part of the Weidman Award. The Webbys, accompanied by their daughter, Robyn, and her husband, David Bew, were also able to tour the national archives.

Webby worked as director of the Brockton Public Library from 1969 to 1994. He also worked in the Brockton public school libraries before and after that, his wife said.
Posted by Harry at 11:21 PM