Under the Gargoyles - Black Sea Quartet 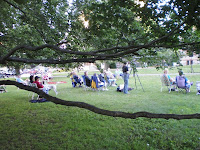 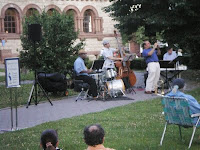 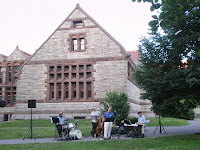 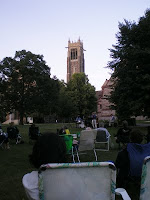 I counted 113 people (plus 3 canines) at one point during the second in the Concerts On The Lawn series at the Thomas Crane Public Library last night. Feet were tapping and hands were clapping to the Black Sea Quarter, a downsized version of trumpeter/singer/songwriter Dan Teager's 15-member Black Sea Salsa Band. In honor of Bastille Day Dan sang several songs in French. He described his fusion of traditional Armenian music with pop and Caribbean rhythms. This program was made possible by the support of the Friends of the Thomas Crane Public Library. Just as last week, the audience was rich with families and many of the children played nicely on the lawn, adding to the "picnic" ambiance of the event. A pleasant time was had by all.