Pity this author's stressful lifestyle (just kidding) "I’m kind of like a cat — I follow the sun around the house and read books and take naps... I’ve had the unimaginable luxury of being able to do nothing but write whenever I want." This is from today's Boston Globe:
new england writers at work [sic]
Paul Harding’s habits all over the map
By Eugenia Williamson | Globe Staff | March 08, 2014
Paul Harding’s 2010 Pulitzer Prize for his novel, “Tinkers,” was a story you don’t hear every day — an unknown writer receiving the nation’s most visible literary prize for a debut book from a tiny independent press. Despite the singularity of his career trajectory, and the resulting media attention, Harding has since managed to settle into a more traditional writer’s life. This fall, he published his second novel, “Enon.” He lives in Topsfield.
REPAIR TO THE STUDY: I moved into a new house about a year and a half ago. Part of the attraction of the house was that it has an honest-to-goodness study. It’s really cool — it has bookcases that go up and over windows that look out over the meadow. It’s wallpapered in this straight-from-central-casting Victorian French-peasant pastoral wallpaper. I never would have deliberately chosen it myself, but since it was there, I rolled with it. It’s the quintessential gentlemen’s study. I feel like I should have cognac and cigars. But since I inhabit it, there’s stuff that doesn’t belong here — piles of books and extension cords. I put a couch in it so I can do my creative napping. I wrote a lot of “Enon” in this room.
GRANDFATHER’S CLOCKS: The desk that I sit at when I write is the desk at which my grandfather repaired antique clocks — like the character in “Tinkers.” He fiddled around with clocks, and I fiddle around with words.
ON THE PROWL: The way the house is set up, I have comfortable couches and piles of books all around. I’m kind of like a cat — I follow the sun around the house and read books and take naps. I ride the updrafts and let things intermingle, and whenever I get the fit to write, I can get the laptop and write wherever the spirit possesses me. Sometimes I think writing is kind of like walking around with a dousing rod, trying to find water.
THE WRITING LIFE: [My writing regimen] is all over the map, but for the past four or five years, I’ve had the unimaginable luxury of being able to do nothing but write whenever I want. I’m sort of on a 24-hour writing cycle. My wife is a teacher, so I get up in the morning with the kids. I give them their breakfasts and make them their lunches and get them off to school, and then I have the day to myself until they get back home at 2:30. Usually, the best time to write is in the morning when my kids leave — that’s when I do my deliberate writing for the day, but [inspiration] can strike at any time . . . I can only write for three hours a day before my brain gets stupid, and then I have to eat a sandwich and look at a newspaper and wait for my kids to get home. Nighttime is a good time for editing. 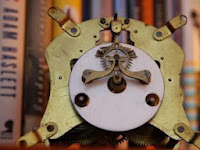 [Caption to clock picture] Paul Harding moved into a new house less than two years ago and does his writing in the “honest-to-goodness” study.

LOST IN THE FUNHOUSE: Once I open a document and start looking at the language, I [experience] this weird phenomenon where my entire brain ends up being absorbed into the language of the book, and I’m preoccupied. Part of that is just water seeking its own level; I do it because I can do it and because nothing is more engrossing to me than being inside the language [or] a character — keeping my mouth shut and my eyes shut and listening and looking for what’s going on in this wholly invented aesthetic realm. I find it literally engrossing, to the extent that when I’m doing it, I’m not thinking about anything in the outside world.
WORLD OF TROUBLE: I’m always looking for the most paradoxical or impossible yet instantly recognizable human predicaments to write about. When I know I have a good book on my hands . . . [I have a] paradoxical feeling of “I’m not good enough to make this work of art that I want to make, and the only way to be good enough is to actually try to do it.’’
Eugenia Williamson is a writer and editor living in Somerville. She can be reached eugenia.williamson@gmail.com.
Posted by Harry at 6:04 PM