Dennis Lehane has shown by his actions, for many years, his support for public libraries. His column in today's Boston Globe is a stirring and important proclamation of their continuing central role in civilization. "...an idea that can’t stand up to skepticism and intellectual rigor isn’t an idea at all, it’s a narrative." And more shocking in today's climate, yet crucial to our culture, he reminds us that "All ideas are not equal, nor are all thinkers." The unique feature of American Public Libraries is to create access to all ideas and thinkers, with the faith that educated and thoughtful humans can sort the wheat from the chaff.
opinion | Dennis Lehane
Boston Public Library wasn’t the target — what was inside was
By Dennis Lehane | April 19, 2014 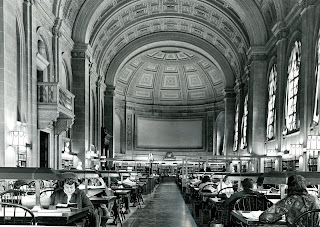 WHEN THE bombs went off at the Boston Marathon last year, my first glimpse of the incident, via a shaky TV camera, was of the corner of the Boston Public Library. My first thought — wholly unformed — was: Whoever did this hates knowledge. In that moment, I had no idea that the intended victims were Marathon runners and spectators; I thought the target was the library. Time has proven me incorrect about the library but not, I feel, about the knowledge. All fanatics hate knowledge. And when I say knowledge, I’m speaking of the unfettered, unrestricted kind. The kind that isn’t easily contained or easily defined. The kind that doesn’t fit in a jar.
My relationship with libraries and the knowledge they hold began reasonably young when my first-grade teacher told my mother I liked to read. Armed with that information, my mother took me to our local neighborhood branch, the Uphams Corner Library, on the corner of Columbia Road and Bird Street, and signed me up for a library card.
And the world changed.
It was that simple and that seismic. The formal education of my mother and father, both Irish immigrants, was amputated at a grade school level. Because of that, they valued knowledge the way only those who’ve been denied access to it can. Once I had access to free books, I went back at least once a week, often twice. At some point my mother, sensing something growing that was bigger than either of us, took me to the BPL’s main branch in Copley Square. In the marble and the tapestries and the great staircases and endless rows of books I felt the weight of history. And the call of it. The pursuit of knowledge wasn’t parochial in that moment, it was global. It had no idea where it was going, only that it was pursuing an endpoint of infinite branches.
The Tsarnaev family story was also an immigrant story.
But whereas the story of my parents and their brothers and sisters and in-laws was a story of a collective flowering, the Tsarnaev’s story was often one of curdling, of unrealized dreams further thwarted by an entitlement narrative. When the riches and boxing trophies that the elder son and his parents seemed to believe were his birthright did not arrive, blame for those failures was not placed on the self, but on the perceived hostility of a culture that had given the Tsarnaevs welfare, Section 8 housing, and a first-class public school education. Tamerlan Tsarnaev’s inability to achieve boxing success may have set him on a path of destruction that led to three dead spectators, more than 260 wounded, and one dead police officer. One couldn’t ask for a more banal or pathetic fuse than that.
We fret in this society — and many societies worldwide — over moral relativism. But I’m far more worried about intellectual relativism. All ideas are not equal, nor are all thinkers. I’m reminded of Chris Rock’s line, “Whatever happened to just plain crazy,” when I think, “What ever happened to just plain stupid?” The Internet has led us down a wholly illusory rabbit hole in which all opinions exist in a kind of egalitarian dystopia — all are equal, so none may flourish. But opinions come in different shapes and flavors. The birther who believes global warming is a hoax because she still feels cold in February holds an opinion substantially less worthy than the scientist with the PhD in environmental science. And we used to know that. As a country, we used to respect knowledge that was earned over knowledge that was cherry picked. Now we watch Fox News, MSNBC, and TMZ.
Three years after Tamerlan Tsarnaev’s boxing dream died, his pursuit of knowledge began, but it was self-serving and self-contained, a strict and narrow narrative that didn’t allow for questions. The “facts” that he discovered during his mother-assisted association with radical Islam were picked with prejudice aforethought. The ideas that grew from them brooked no argument. But an idea that can’t stand up to skepticism and intellectual rigor isn’t an idea at all, it’s a narrative.
And that type of narrative is often rigid and recalcitrant, steeped in an inferiority complex that leads to shouting down your opponents. Or shooting them. Or blowing them up. Because it’s not an argument you can win, it’s only an argument you feel. So what’s still standing after the bombs or the bullets? The better ideas.
The library stands. The Marathon will be run for the 118th time. And bad narratives and bad ideas continue to do what they have always done — flower and die, flower and die.
Dennis Lehane is the author, most recently, of “Live By Night.”
Posted by Harry at 9:23 PM