This is not a water slide! 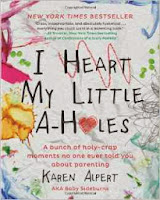 When I first read William D. Kickham's letter to the Globe, praising this column which I had missed, I figured it must refer to "Go the F*** to sleep" the book by Adam Mansbach that was wildly popular as a CD and video as read by Samuel L. Jackson. My reaction to that was the same as Beckham's in this column, when she says "Alpert’s words are crude and lazy, easy to grab, slang that you sling around, but what do they mean, really?" Too many people seem to think the slippery slope from civilization to chaotic barbarism is a water slide. (I just made that up - and I think it's a great phrase if I do say so myself.)

A crude, but wildly popular shot at kids

By Beverly Beckham | Globe Correspondent | March 23, 2014
My youngest child was 6 months old, her brother and sister 6 and 8 when I left them one night with a baby sitter while my husband and I had dinner a few miles away.
When we came home, I asked the young sitter how things went. The older kids were great, she said. But the baby was a brat.
The word angered me. It angers me still. How can a 6-month-old be a brat? Fussy, yes? Difficult. Unsettled. Loud. Unhappy. Inconsolable.
I never called that baby sitter again.
But maybe that’s just me.
There’s a book due out April 8. It’s being marketed as a Mother’s Day gift. Its title? “I Heart My Little A-Holes.” Even before its official publication, it has a five-star rating on Amazon.com. Readers are effusing over the book.
I am dumbfounded by this. But maybe that’s just me, too.
The author, Karen Alpert, is a mother of two. She has a blog, Baby Sideburns, on the ChicagoNow blog network, which is run by the Chicago Tribune.
On Nov. 26, 2012, she posted a piece called “What NOT to F*ing buy my kids this holiday.” It was irreverent and crude, an open letter to Grammy, Grampy, Nana, and Pop Pop, full of words the Globe won’t print.
And it went viral.
In an interview with Publisher’s Weekly last month, Alpert said that until this piece, she’d been a struggling writer with only 170 Facebook followers.
After this post, she got fame and fans and now has more than 130,000 Facebook followers.
Alpert had found a gimmick.
“I’m not a huge curser,” she said, “but I cursed a lot in that post and people said, ‘we love it! . . . and I said, ‘All right, I’ll dial that up.’ ”
And her writing career took off.
She self-published “I Heart My Little A-Holes” after getting $21,000 in contributions through Kickstarter, a social fund-raising network, and when the book began making money, the Golden Goose named HarperCollins came calling.
And this, I suppose, is the happy ending.
Except for the kids. Her kids. Our kids. All the kids getting slammed on the Internet for being kids. Wealthysinglemommy.com calls her kid the same name that Alpert uses in her book title. And everybody laughs.
A pregnant woman with a toddler approached Alpert and her two children at a restaurant and asked what it’s like to have two kids. And Alpert said something nice. But among the things Alpert said she wanted to say, what she wrote in her blog and reprinted in her book, is, “Thank God for Roe v. Wade, lady, because you still have a choice.” And that “Feeding two kids is a b----.”
I know it’s a trend to complain about our children and our overscheduled, overprogrammed lives. And I know this is Alpert’s schtick. Anything for a laugh. And fame. And money.
But her words offend me. I’m the daughter of a mother who would have loved a second child. I’m the mother of a daughter who would welcome more children. I’m the friend of a young woman who just lost her unborn baby daughter three weeks ago. I know too many women who want children and can’t have them, women who’ve had children and buried them, women who really do have a hard time going anywhere because the inevitable question comes up, “How many kids do you have?,” and they don’t know how to answer.
Alpert’s words are crude and lazy, easy to grab, slang that you sling around, but what do they mean, really? Feeding two kids is what exactly?
Isn’t a writer supposed to say what’s been said in a new way?
Maybe this is the new way. And maybe it is just me. But it sure doesn’t feel like the right way.
Beverly Beckham can be reached at beverlybeckham@me.com.
Posted by Harry at 12:13 PM