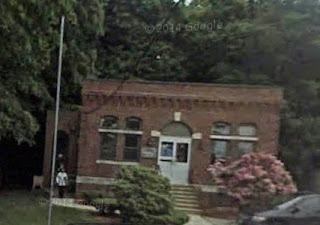 The previous post was partly inspired by my daughter's posting of this article about the fate of "the Old Pearle L. Crawford Memorial Library." I tracked down those old pictures of Jody and me in front of it, then I grabbed the image to the right from Street View on Google Maps. (I hope they don't mind.)

DUDLEY — Selectmen have accepted an $85,000 bid from the owner of the Dippin' Donuts on West Main Street for the vacant building that served as the town library for more than 100 years.

Donna Karapatsas' was the higher of two proposals for the 3,000-square-foot brick building located on the other side of Village Street from her business.

He recommended the board accept the bid from Ms. Karapatsas because it was "highly advantageous and in the best interests of the town." 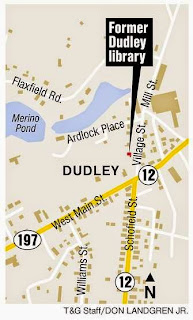 Mr. Balukonis said her proposal stated the old library parking lot would be used for doughnut shop employees. The building interior would be renovated for storage and office space. Renovations to the exterior, he said, would be in keeping with the present building's style.

"I think the new owner will be a good steward of that property," Selectman John J. Marsi said.

The library, built on the edge of a prominent mill village in 1901, had served the town for more than a century when it closed four years ago.

Town meeting voters authorized selectmen to dispose, sell or transfer it, yet an attempt last year to sell the property for $75,000 failed to attract bidders.

In putting the site up for sale in October, Mr. Balukonis said, the town's goal was to eliminate the expense of maintaining the old building while generating revenue.

To aid in its sale, the library was among four parcels on Village Street that were rezoned from residential to business by voters at the October town meeting.

By way of requirements set in the request for proposals, the town sought to retain the integrity of the building exterior because of its significant history.

Henry Hale Stevens incorporated Stevens Linen Assoc. in 1846 and constructed the main mill near the library in the early 1860s. Its twin six-story towers stood over what became the largest of five mill villages in Dudley. Mr. Stevens donated land for the town to construct the library in 1901.

In 1972 it was renamed in honor of former trustee Pearle L. Crawford for her many contributions to the library and the community.

After 109 years, the small confines of the library at 1 Village St. were replaced by a new library on Schofield Avenue.