Worcester - where I began my career

This article was part of the information for prospective applicants for Library Director at the Worcester Public Library. (I do not plan to apply, although friends have urged me to come out of retirement to the place where I began my professional career.) I don't see any mention of the Residency Requirement that used to govern WPL employees. I wonder if they have eliminated it. I love Worcester - my daughter and granddaughter are natives - but would not give up a home I love that is less than 9 miles from the Library. A fun coincidence is the mention, under Pro/Parkland that "Elm Park was designed by Frederick Law Olmsted..." My final Library Director position was at the Thomas Crane Public Library in Quincy, Massachusetts, where the landscape architecture was also designed by Olmsted (and the building by Henry Hobson Richardson - I was blessed to be in beautiful environs.) 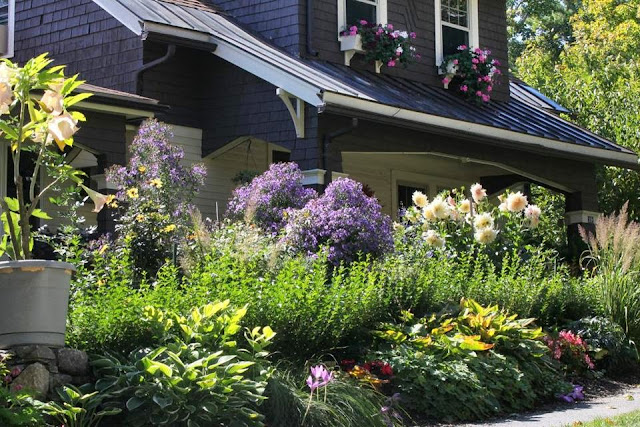 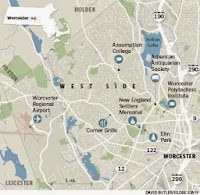 “Worcester’s counterpart to the tony suburbs of Wellesley, Brookline, and Newton” is how a City of Worcester website describes the West Side. Indeed, the neighborhood is so pretty that a newcomer traveling through the city and ending up here might feel a bit like Dorothy: I don’t think I’m in Worcester anymore. Despite the distinctly suburban feel, yes, it is Worcester.

Lovers of old homes will salivate at the grand houses. In fact, Worcester has three historic districts, two on the West Side. The Massachusetts Avenue one, established in 1975, encompasses 21 properties covering roughly 14 acres. The neighboring Montvale Historic District includes 57 properties north of Salisbury Street, one of the main roadways on the West Side. Both historic districts predominately comprise turn-of-the-last-century homes of varied architectural styles.

While the homes are every bit as beautiful as similar ones closer to Boston, the prices are much lower. And though Worcester doesn’t have everything Boston has to offer, it boasts the Worcester Art Museum, the American Antiquarian Society, Mechanics Hall, great hospitals, professional sports teams, ethnic markets, and restaurants galore, particularly on Shrewsbury Street, in the city’s traditionally Italian neighborhood. Meanwhile, the second largest city in New England is undergoing a revival. (No, really, this time it’s actually happening.) The $563 million CitySquare project in downtown Worcester is creating more than 2.2 million square feet of retail, medical, and residential space, as well as a more pedestrian-friendly street pattern.

The amount that graphic artist Harvey R. Ball, a Worcester native, was paid to create the Smiley Face button as part of a employee morale campaign for a local insurance company in 1963.

The time it took him to draw it, according to the Worcester Historical
Museum . Others have claimed credit for it — and made a lot of money.

To date, the number of infected or at-risk trees cut down in Worcester and some neighboring towns to control infestations of Asian longhorned beetles. A local initiative recently celebrated the planting of 30,000 trees.

The best a Massachusetts team has ever done in the Little League World Series US final, achieved in 2002 by the West Side’s Jesse Burkett Little League All-Stars and a team from Saugus the following year.

Beautiful homes at comparatively low prices. On the West Side, a gorgeous 3,721-square-foot home on Lenox Street updated but with loads of old-house-details preserved, recently sold for $385,000.

Though it’s known as the “Heart of the Commonwealth” (which is why the city seal and flag bear a heart), it’s likely you’ve heard it referred to as the “armpit of Massachusetts.” So, if you live here, you may have to put up with that anti-Worcester attitude. Call it the ignorance of the arrogant.

Elm Park was designed by Frederick Law Olmsted and is listed on the National Register of Historic Places. In all, there are about 1,250 acres of parkland in Worcester.

It’s improving, but for a city with 10 colleges and universities (Clark University, Worcester Polytechnic Institute, and the College of the Holy Cross among them), the hip factor is fairly low.

[If you click on the link above or here you can see the article with 7 more photos giving the "flavor" of Worcester's West Side. Harry The Librarian]

- The home your money buys on Worcester’s West Side

Vanessa Parks is a freelance writer in Central Massachusetts. Send e-mail to Address@globe.com. [sic]
Posted by Harry at 3:39 PM

I am an American man, and I have decided to boycott American women. In a nutshell, American women are the most likely to cheat on you, to divorce you, to get fat, to steal half of your money in the divorce courts, don’t know how to cook or clean, don’t want to have children, etc. Therefore, what intelligent man would want to get involved with American women?

American women are generally immature, selfish, extremely arrogant and self-centered, mentally unstable, irresponsible, and highly unchaste. The behavior of most American women is utterly disgusting, to say the least.