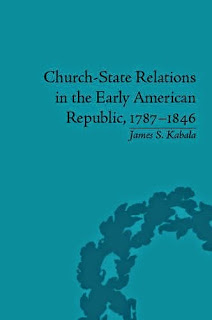 Last night Jody and I were at the wake for Esther Elliott, mother of Lois Bernier. (Both worked with me at the Pearle L. Crawford Memorial Library in Dudley.)
We met - and immediately recognized, after 25 years - Catherine Kabala and husband Stanley. I remarked that Mrs. Kabala and "Jimmy" used to be among the most loyal patrons of Children's Librarian Norma Waterhouse.
The proud parents told us of his book, on the shelves of over 300 libraries. As Harry ROGER WILLIAMS III I remarked on my interest in church-state relations. James' book begins 103 years after Roger Williams' death, but his mission of promoting religious freedom continued.
A delightful sentence in his Introduction states, "This book will complicate such assumptions by exploring sixty years of contentious debate in American civic culture over the proper role of religion in public life." [He refers to the assumptions of those who claim the Founding Fathers intended the United States to be a Christian nation AND those who presume the First Amendment settled the issue.]
The book is dedicated to his parents, and he thanks the many research libraries that made the book possible. I'm sure he meant to also thank Norma Waterhouse, who helped generations of Dudley children develop a love for reading books that makes possible the ability to write them. That may be presumptuous of me but this is such a long post that only a few will probably read it... [The final sentence was intended mostly for readers on Facebook, where I am also posting this, particularly to make sure that Mrs. Waterhouse sees it.]
Posted by Harry at 4:00 PM