A Love Note to the Brockton Symphony 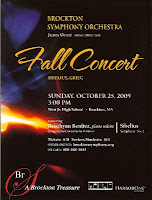 I just wrote the following Letter to the Editor to our local newspaper:
To the Enterprise Editor:
There were many ways to enjoy this beautiful Sunday afternoon. I joined 300 music lovers for the Brockton Symphony Orchestra’s Fall Concert, “Ice,” at the West Junior High School. Music Director James Orent conducted a Scandinavian celebration of fiery music inspired by cool climates, starting with Sibelius’ Finlandia. It’s powerful opening, melodic strings and robust energy kept the audience enchanted and attentive. Then Venezuelan pianist Kristhyan Benitez came to the grand piano, soloist for Grieg’s Piano Concerto in A minor. Sometimes you compliment a musician by saying, “He made it look easy.” The first movement, with its loud, powerful opening could only be described as hard work, covering the keyboard with strength and exuberance. The second was a shocking departure, smooth velvet strings and melancholy horns, the piano a music box. The third returned to the power and energy of the first, the horns now gutsy, the strings nearly growling. The melody evolves, sweet as a love song, then melancholy, then a driving march, a momentary minuet, then a dervishly whirling transition to the explosive finale. That was just the first half! The piano disappeared during intermission and we were treated to Sibelius’ Symphony No. 2 in D Major, a work of dignity and power. After the other works, this seemed more like the general conception of classical music, almost a tone poem, until it became vigorous enough to require Concertmistress Sonja Larson to lead a re-tuning between movements. The abrupt, almost disjointed transitions from melodic to dramatic marked the modernity of the piece. Just as I thought the complexity might challenge listeners my cheeks flushed with the passion and erotic lushness of a fiery melody leading to a powerful climax. I couldn’t have been more satisfied. This was a great day for music lovers in Brockton.
Harry R. Williams III
Posted by Harry at 9:00 PM