Off and running - a bumpy kickoff 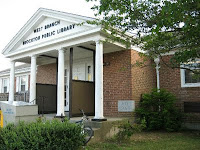 Today I was as close as ever to a coronary or a stroke. Yesterday I met with the Assistant to the State College Department Head in charge of the new tutoring program, and a bunch of the tutors. We toured the library and discussed the project. By the end of the meeting we agreed that the Homework Assistance would begin at both Branches today. I and a colleague would unlock the doors to the lower level at 3pm and come lock up again at 7 - no library staff on hand in between. That was OK with the Assistant. Today at a meeting at our OCLN Network Headquarters, the Department Head called my cell and said "No library staff - no tutors. I'll tell the Mayor we are putting it off." I drove directly to City Hall and told the Mayor and his staff that we would have to postpone the tutoring. The Mayor explained to me why I was mistaken and how I would resolve this roadblock - "Just get it done - pay overtime if you have to - it begins today!" I called the College from the Mayor's office and told the Department Head to send the tutors, and she agreed. I staffed our East Branch from 3-7 and sent a custodian to West. We had tutors and students (with parents and grandparents) at both Branches. We are off and running after a bumpy kickoff!
Posted by Harry at 10:19 PM