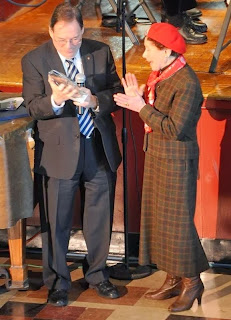 Today's Enterprise has a gallery of four photos from yesterday's "Paris, City of Love" concert, including one of yours truly presenting Pauline Perkins with a crystal plaque honoring her 17 years on the Brockton Symphony Orchestra's Board of Directors, along with many other avenues of service to the community. One thing you cannot tell from the photo - the plaque is not only beautiful - it is HEAVY! Congratulations to Pauline, and best wishes to you and Faelton in the next phase and the next community.
The concert was magnificent! We were treated to the world premiere of Maestro James M. Orent's arrangement of "Clair de Lune" along with Chausson's Symphony in B-flat major, an almost overwhelming feast of musicality, and other French gems. The audience got a laugh when Maestro Orent described Berlioz's "March to the Scaffold" as a "French Love Song," wherein you can hear the head bounce down steps after the guillotine falls.
Posted by Harry at 11:45 AM