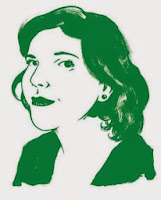 The short piece below is fun and informative. Any of you struggling with ambitions to "be a writer" may enjoy this. I hadn't read too many sentences before thinking, "She should think of herself as a poet," and not worry so much about the perceived "form" of her work. Then I got to the Penultimate sentence. She says, "The only people I know who write like this are poets." The end of the second paragraph says "she stared writing at traffic lights..." I'm thinking they meant "started writing" but their version makes an interesting image.

"Story behind the book: Jenny Offill wrote her book one index card at a time" By Kate Tuttle, Globe correspondent, February 01, 2014
“Dept. of Speculation” isn’t the novel Jenny Offill set out to write. “I had written a novel that was more of a classic linear novel,” she said in a telephone interview, “and I worked on it and worked on it for years, and it always seemed like it wouldn’t catch fire. At a certain point I just scrapped it all, and I kept maybe 15 percent of it, and I wrote those parts out on note cards.”
The process came, in part, from sheer frustration. “I was Googling writer’s block,” said Offill, when she found an article about Mary Robison. “I had read somewhere that she had had writer’s block for ten years. I came across a thing that said that she stared writing at traffic lights in LA, almost to trick herself into getting these small pieces done and going again.”
Though the book retained its central focus on a marriage, it’s also studded with ideas – “little facts about evolutionary biology, stoic philosophy, astronauts,” Offill said — each on its own index card. “Eventually I felt like I was starting to have the right rhythms and juxtapositions,” she said, “to create this sort of fragmented narrative.”
The result is a novel less than 200 pages, a size of book all too often disparaged even when praised (“a minor masterpiece” is the phrase Offill laughingly cited). “I have a slightly contrarian streak as a writer, and one of the things I was interested in was how distilled could I make a life,” Offill said, “and how I could cross what is kind of trivilialized as a domestic novel with a novel of ideas, a philosophical novel.”
The product, a book Michael Cunningham called “as compact and mysterious as a neutron,” would seem to validate its unusual creation process, but Offill offered a friendly warning: “It’s sort of a terrible way to write a novel. I’m not advising it. The only people I know who write like this are poets.”
Offill will read from “Dept. of Speculation” at 7 p.m. Wednesday at Brookline Booksmith.
Kate Tuttle, a writer and editor, can be reached at kate.tuttle@gmail.com.
Posted by Harry at 11:48 AM