Risk and struggle frighten parents but enable children to GROW!

This short article makes me want to stand up and cheer - or maybe just go outside and play! As I said in my "Handwritten Notes vs. Laptops in Lectures: Ease vs. Effectiveness!" post, I will soon talk more about the disaster for a bird if you help it break out of its shell, or let it remain snug in its nest, or for a caterpillar if you interrupt its struggle to emerge. 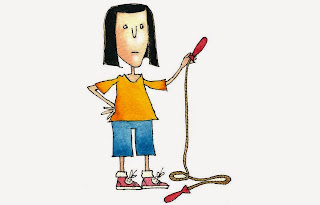 IT’S THE start of summer, and many parents are wondering: What will the children do? When I was a child in the 1950s, the answer was easy. The children would play. We played freely with other children, in our own chosen ways, away from adults. We got bored and overcame boredom. We embarked on adventures, took risks, sometimes hurt ourselves, got into trouble, and figured out how to get out of it. We played in ways that our parents never knew about or wanted to know about.

In such play we acquired knowledge and skills that cannot be taught in school. We learned how to take initiative, make our own decisions, solve our own problems, get along with peers as equals, experience fear and manage it, experience anger and overcome it. We also discovered our passionate interests, pursued them, and became skilled at them — interests that for many of us later became careers. In short, we learned the attitudes and skills essential to a satisfying adulthood.

Free play, without adult intervention, is nature’s way of teaching children how to be adults. Everywhere else children are directed and protected by adults, but in play children are the adults. That’s play’s primary purpose, but we undermine that purpose when we supervise or intervene.

Over the past 60 years, we’ve seen a huge decline in children’s freedom and opportunity to play on their own. Over this same period, we’ve also seen a dramatic increase in the rates of depression and anxiety disorders among young people — five to eight times what they were in the 1950s, based on standard clinical questionnaires given to normative groups over the decades.

Our children — and the young of other mammals — love to play in moderately risky ways. Through such play, they acquire the physical, social, and emotional capacities required for healthy development. They learn to get along with one another by playing socially, and they learn to deal with emergencies by playing in ways that entail risk. For example, young monkeys playfully swing from branch to branch, high enough up that a fall would hurt; goat kids run along cliffs and leap awkwardly into the air, so that landing is difficult. Young mammals of many species playfully fight and chase one another, and they occasionally get hurt in the process.

Why is such play so attractive? It can cause injury, so why hasn’t natural selection weeded out the innate desire for it? We have some clues from laboratory experiments.

Researchers have found that when young rats or monkeys are deprived of play during critical periods in their development, the animals grow up as emotional cripples. They are psychologically paralyzed when placed in novel, slightly frightening environments to which normally raised animals would adapt. They alternate between incapacitating fear and inappropriate aggression when placed with unfamiliar peers. So it is no surprise to me that play-deprived human children grow up lacking the social and emotional skills required to deal well with life’s inevitable stressors. They may also grow up deficient in the abilities to think creatively, take initiative, and assume responsibility.

We have deprived children of free, venturesome play, presumably for their own good, but in the process we have denied them the opportunity to learn how to be resilient by playing in risky, emotion-inducing ways.

Peter Gray is a research professor of psychology at Boston College and author of “Free to Learn: Why Unleashing the Instinct to Play Will Make Our Children Happier, More Self-Reliant, and Better Students for Life.’’
Posted by Harry at 1:13 PM