A Political Challenge for Publishers - Politicians as Authors

Even when books by politicians sell, "relatively few people seem to be actually reading them... Most readers got only 2 percent into [Hillary] Clinton’s book. They got 14 percent of the way through [Elizabeth] Warren’s book." This Boston Globe article adds, "only in recent years have more, shall we say, pedestrian politicians attempted to hit the bestseller lists."

[picture caption:] It’s a market that is as vast as the appetite for it is small: books written by politicians.

WASHINGTON — Mike Huckabee wrote a Christmas tale about a boy named Mike who opened his presents early before learning the lesson of patience. Newt Gingrich has authored more than two dozen books, including a historical novel that reimagines the aftermath of World War II.

It’s a market that is as vast as the appetite for it is small: books written by politicians.

They fill the shelves at bookstores, they dominate the news coverage, and they pad the paychecks of politicians. But sales are often disappointing — and relatively few people seem to be actually reading them.

Political blockbusters are possible, to be sure, and Senator Elizabeth Warren’s new book, “A Fighting Chance,” is selling remarkably well compared with most other politicians’ works. The book has sold 65,000 copies, according to Nielsen BookScan, a service that tracks 85 percent of the US book industry.

Hillary Rodham Clinton’s new book, “Hard Choices,” has sold 160,000 copies so far, a tally that has been considered a disappointment given the amount of buzz around the book and what was likely a hefty advance.

But the bumper crop of books by politicians has led to a drought in books that prove memorable beyond the latest news cycle. And while fans may collect them like baseball cards, to display the book of their favored politician on the shelf, few actually read the prose.

The Washington Post recently examined how far readers actually made it into politicians’ books, based on where material was highlighted while reading on a Kindle.

The result? Most readers got only 2 percent into Clinton’s book. They got 14 percent of the way through Warren’s book.

Neither book fared that well in bookstores. Brown’s book sold 27,000 copies, while Patrick’s sold only 11,000, according to the Nielsen BookScan data. 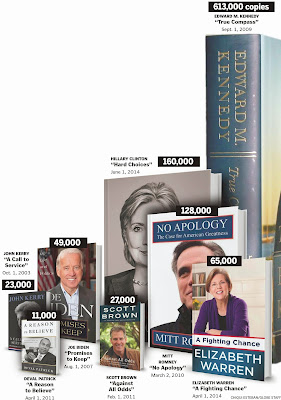 “It’s always a gamble with a big advance,” said Jim Milliot, editorial director of Publishers Weekly. “But if these books continually flopped and they lost money hand over fist, they wouldn’t keep doing them.”

“I wouldn’t discount the idea that publishers do deal in the likelihood of the politician becomes famous one way or another — running for president, or getting arrested,” Milliot added. “It really is all about name recognition, free media attention.”

Presidents and national leaders have often written memoirs after leaving office. Ulysses S. Grant wrote his personal memoirs, for example, shortly before his death in 1885. But only in recent years have more, shall we say, pedestrian politicians attempted to hit the bestseller lists.

It has become as important on the presidential campaign checklist as eating pork on a stick at the Iowa State Fair or attending dozens of town meetings in New Hampshire. During the 2008 campaign, almost every candidate had a book (from Republican nominee John McCain’s “Why Courage Matters” to Libertarian candidate Bob Barr’s “The Meaning of Is”).

One-third of the US Senate are now published authors, collectively writing 65 different books.

Some are deep policy papers (such as Senator Ed Markey’s 1982 book, “Nuclear Peril: The Politics of Proliferation”) while others are one part politicking, one part travelogue (Senator Angus King wrote about traveling the country in an RV with his family in a book called “Governor’s Travels: How I Left Politics, Learned to Back Up a Bus, and Found America”).

Senator Al Franken may be the only political author who was intentionally funny. His book resume includes the 1992 volume “I’m Good Enough, I’m Smart Enough, and Doggone It, People Like Me! Affirmations by Stuart Smalley.”

One draw for publishers is that the books can become investments, with potential boomlets as a politician’s career rises. No one illustrates this better than Barack Obama, whose 1995 book, “Dreams from My Father,” became a huge bestseller.

Another reason political books can be good business is that politicians will buy a huge number of the books themselves — something that is not available to the average author.

“You have to have a book where the author can get publicity,” Milliot said. “And politicians are good at getting publicity.”

Matt Viser can be reached at matt.viser@globe.com.
Posted by Harry at 6:59 PM