One of the great pleasures of my tenure as Director of the Thomas Crane Public Library was getting to know "Abe" Cohen, who attended nearly every lecture and cultural program we offered. He sat up front, interacted with presenters, and was friendly and approachable to everyone he encountered. I had to learn from others that he had helped found the South Shore Coalition for Human Rights, and spent a life of activism, seeking to make the world a better place. He was far too humble for self-promotion, but never hesitated to take a tough, and if necessary an unpopular, stand when people's rights were at stake. I am grateful for the inspiring example of Abraham Cohen. Thanks to The Boston Globe for publishing this uplifting story. 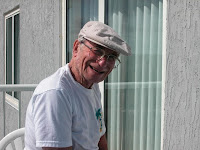 Picture caption: The FBI monitored Mr. Cohen because of his activism.

A few weeks before the Nazis surrendered in World War II, Abraham Cohen took a rowboat across the Neckar River on the outskirts of Heidelberg, Germany, to tend to a badly injured US soldier on the other side of the enemy line.

A US Army first lieutenant and an assistant battalion surgeon, Mr. Cohen found a German building flying a Red Cross flag. Inside was an American “in very bad shape,” he recalled for a website of Quincy veterans’ memories. “He was having breathing problems, and they had rigged up a gadget that kept his mouth open and his tongue immobilized.”

When German officers found him with the US soldier, Mr. Cohen talked his way out of danger, even after a German major took his identification information and read aloud his Jewish name. Because Mr. Cohen was a medical officer and a noncombatant, the major sent him back to the river blindfolded.

“This was the kind of man he was,” said his daughter Nancy of Chicago. “You did what you had to do. If someone was hurt and you could help, you went to find them.”

Mr. Cohen, a socialist and a lifelong advocate for social justice, died of colon cancer June 22 in hospice care in Greenfield. He was 97 and lived most of his life in Quincy, before moving to Greenfield recently to live with his son, David.

For his daring actions in Heidelberg on March 30, 1945, Mr. Cohen was awarded a Bronze Star for meritorious service. “The courage and determination displayed by Lieutenant Cohen reflect credit upon himself and upon the Armed Forces of the United States,” the citation read.

That was the second Bronze Star awarded to Mr. Cohen. He was also honored for meritorious service when he treated and evacuated the injured in France and Germany from late December 1944 until early May 1945. “He worked untiringly and under the most hazardous conditions to see that all wounded men were attended,” the citation read.

Mr. Cohen put himself on the line just as passionately as a political activist at home. As a 10-year-old, he distributed leaflets protesting the scheduled execution in 1927 of anarchists Nicola Sacco and Bartolomeo Vanzetti, who had been convicted of first-degree murder in the deaths of two men during an armed robbery in Braintree.

“He wanted to reach people with his social issues, even when he was a child,” his daughter said. “He was so influenced by this experience. He carried it with him.”

Years later, Mr. Cohen and his wife, Madeline, helped found the South Shore Coalition for Human Rights. They were also among the advocates fighting against discrimination in Quincy public housing.

During the anti-Communist era of the early 1950s, the Cohens were monitored by the FBI because of their progressive activism, their daughter said.

Mr. Cohen refused to testify in 1955 when the Massachusetts Commission on Communism wanted to question his political affiliation.

Named as a member of the Communist Party in a commission report, Mr. Cohen told the Globe in 1958: “They say I became a member of the party in 1944. I was in the Army in 1944. That’s the way a lot of their evidence runs.”

The older of two brothers, Mr. Cohen was born in Malden; the family moved to Quincy when he was 6. His Russian immigrant parents were outspoken socialists and union activists, and his father was a typesetter who often printed political literature.

As a teenager, Mr. Cohen was a camp counselor when he met Madeline Sivachek.

“It’s a story he only told me a few months ago,” their daughter said. “He was working at this camp, and she was a cook there. When he saw her, he said, ‘This is the woman I am going to marry.’ ”

The two kept in touch through letters as Mr. Cohen graduated from Quincy High School and the Massachusetts College of Optometry. He practiced for a few years before being drafted.

“He wanted to go to war, because he understood what was going on in the bigger picture,” his daughter said. “He had this incredible belief in democracy, and he wanted to save it.”

A week after returning to Quincy, he proposed to Madeline on New Year’s Eve.

Encountering difficulties finding optometry patients, he opened United Granite Co. at the end of the 1940s and produced headstones, working for the business until he was in his 80s.

Over the years, Mr. Cohen served as president of the South Shore Coalition for Human Rights. He was also involved with fair housing advocacy and the area’s Jewish community.

“He was deeply committed to his principles for his whole life,” said his son, David of Greenfield. “He really focused on inequality and the evils of racism.”

During years when racial tensions were high in Boston and Quincy, Mr. Cohen and his wife rented an apartment to a black family.

“He was ahead of his time,” his daughter said. “Even if you disagreed with him on issues like politics and the war, you would still respect him for the integrity of his views.”

For most of his life, Mr. Cohen worked seven days a week, but he always made time for his family. The Cohens ate every meal together and used the time to catch up. There were no excuses for missing a meal, Nancy said.

“He genuinely loved being a father,” she said. “On his birthday, he would give us presents because he was just so happy to be our dad.”

Mr. Cohen continued to live on his own after retiring in his 80s, volunteering at the library, listening to lectures, and going for long walks.

“He would tell me: ‘I have to walk to the supermarket. If I get a ride from somebody, that means I’m getting lazy,’ ” Nancy said.

Mr. Cohen kept close ties to his family and corresponded with his only granddaughter, Mandyof Los Angeles, through letters written in Yiddish, which she was studying.

“It was like their own secret language,” Nancy said. “He was like that with a lot of people. He had very special relationships.”

A service has been held.
Posted by Harry at 7:03 PM