EDIT, or Maybe DELETE. Do not hit "Send" right away!

[Spoiler alert] This is the final line in the Boston Globe article below: "Edit thyself. Few of us are so smart or clever that we always get it right the first time." [Second spoiler alert] The following sentence includes a cuss word that I normally would not use, but that is crucial to the quote. In "Bird by Bird: Some Instructions on Writing and Life," Anne Lamott encourages us to write "Shitty First Drafts." This "nasty" prose will never see the light of day, but gives the author a starting point - prose to be edited OR DELETED. When you are outraged or indignant, feel free to hurl invective and expletives ON YOUR OWN SCREEN but avoid the "SEND" button until you count to ten (or more) and then edit, or maybe delete! 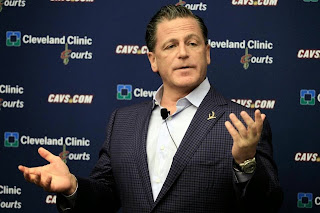 IN 2010, Dan Gilbert excoriated basketball player LeBron James’s decision to sign with the Miami Heat, calling it “cowardly,” “narcissistic,” and a “shameful display of selfishness and betrayal.” Gilbert was not merely an aggrieved fan, however. He was the owner of the Cleveland Cavaliers, the team James was leaving.

Four years later Gilbert is still the owner, and James is now back. The two profess the past is behind them but still, those are thoughts Gilbert has made clear he wishes he’d never expressed. If Gilbert can take any solace in his boneheadedness, though, it’s that he’s not alone. People who should know better — people of power, wealth, and fame — say the stupidest things. They’re helping to give new life to an old cottage industry: the art of the apology. But better, however, would be never to say these things in the first place.

A few days ago, Malaysian politician Bung Moktar Radin congratulated Germany on its recent World Cup win: “Well done … bravo … long live Hitler,” he tweeted. Last month the US Department of Education posted a photo of actor Kristen Wiig, looking obviously intoxicated in a scene from “Bridesmaids,” with a caption saying, “Help me, I’m poor.” “If this is you,” warned the department, “then you better (apply for financial aid).” Also last month, TV viewers saw horse owner Steve Coburn let loose, saying owners who didn’t enter their horses in the first two races of the Triple Crown had taken “the coward’s way out.”

The month before, a Miami Dolphins running back tweeted “OMG,” “horrible” upon hearing the St. Louis Rams had signed Michael Sam, pro football’s first openly gay player. A few days earlier, the Commonwealth of Massachusetts proclaimed “Sexual assault is always avoidable,” ostensibly to mark May as Sexual Assault Awareness Month. And in January, MSNBC expressed its approval of a cute Cheerios ad featuring a biracial family, saying, “Maybe the rightwing will hate it, but everyone else will go awww.”

Predictable outrage, of course, greeted each remark. So did predictable apologies.

After a rebuke from his country’s prime minister, the Malaysian pol somewhat non-grammatically apologized: “I unintentionally said something that hurt d feeling of d ppl in Germany.” “We’re very sorry,” said the US Department of Education, regretting its “insensitivity.” I’m “very ashamed of myself,” a chastened Coburn said two days after ripping into the horse-racing industry.

The Miami Dolphins player, meanwhile, waxed broadly in his well-scripted apology, expressing remorse not only to Sam but to pretty much everyone else as well, promising in the future to “represent the values of the Miami Dolphins organization.”

“I personally apologize,” said the president of MSNBC, terming the anti-conservative gibe “outrageous and unacceptable.”

All well and good, I suppose. But still, the offending comments were made. Some — such as the Department of Education post — were just inadvertent or lame jokes. Others — such as MSNBC’s tweet — were likely more deeply felt. Either way, what once would have been boorish thoughts heard or seen by just a few, are now, with stunning rapidity, spread worldwide as stories, tweets, posts, or emails passed on from one user to the next. That’s what happened to public relations rep Justine Sacco, who last December tweeted “Going to Africa. Hope I don’t get AIDS. Just kidding. I’m white!” immediately before boarding an 11-hour flight to Cape Town. By the time she landed, her tweet had become a worldwide obsession and her job had been lost.

Dan Gilbert wrote and posted his screed in the heat of the moment following LeBron’s much anticipated “Decision.” Coburn the horseman faced the cameras emotionally distraught from his loss. Competing for ever more followers and influence, Twitter and other social media encourage users’ desperate efforts to be distinctive or outrageous.

There’s much to like about instantaneous communication, but not, perhaps, about thoughts instantly expressed. An old piece of advice runs through my head every time I see these now-familiar routines of offending statements and heartfelt apologies: Sleep on it. That notion runs counter to the immediate-response ethos of social media, but it’s worth reviving. Edit thyself. Few of us are so smart or clever that we always get it right the first time.

Tom Keane can be reached at tomkeane@tomkeane.com.
Posted by Harry at 7:36 PM