A Voice Artist ahead of his time: RIP Phil Austin

Phil Austin (Nick Danger) of the Firesign Theater has left the land of the living. I am sad to realize what a vacuum it leaves in my world, while thrilled and grateful to be among the millions who found his humor to be more important than you might reasonably expect.
Firesign albums were not just audio humor – they created an immersive aural environment that put you in the middle of the action. There were years when almost every sentence I uttered used their words. 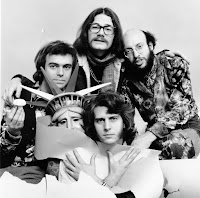 How ironic that I posted on Facebook two weeks ago, at dinner after Rowan Weller’s recital, Jane Stephanie Lantz’s wish that I would quote anything by the Firesign Theater rather than “This is John Galt Speaking” from Ayn Rand’s Atlas Shrugged.
Like yours truly hopes to do, he followed one successful career with another as a voice-over artist and audiobook narrator.

He pronounced his name “Regnad Kcin,” because from behind his desk that’s how he read it, backward, through his glass office door. But listeners to Firesign Theater radio broadcasts and record albums knew him as Nick Danger, the loopy fictional detective who strode “out of the fog, into the smog,” focusing his third eye, hidden under his hat, on solving crime.

“Nick Danger has left the office,” the Firesign Theater website says in its tribute to Phil Austin, the comic who voiced that detective. Mr. Austin, who was a founding member of that cheeky underground group, died of an aneurysm on June 18 at his home on Fox Island, Wash., in Puget Sound. He was 74. His wife, Oona, said he had had cancer for months.

The Firesign Theater became famous in the late 1960s and early ’70s for albums of surrealistic satire, among them “How Can You Be Two Places at Once When You’re Not Anywhere at All,” “I Think We’re All Bozos on This Bus” and “Don’t Crush That Dwarf, Hand Me the Pliers.”

Mr. Austin was a writer, producer, guitarist and, in addition to Nick Danger, the voice of characters like Bebop Loco, a radio personality, on the album “Give Me Immortality or Give Me Death,” and as a New Age nudist and documentarian narrator, on “Everything You Know Is Wrong.”

The Firesign Theater’s albums, collections of skits that college students could recite verbatim, were nominated for three Grammy Awards (although the group never won). “Don’t Crush That Dwarf” was enshrined in the Library of Congress’s National Recording Registry in 2006. 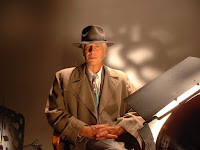 Nick Danger, Mr. Austin’s most famous character, was initially based on Dashiell Hammett’s hard-boiled Sam Spade but later became more like Raymond Chandler’s contemplative detective Philip Marlowe — although with a flakiness all his own.

In one episode, thinking out loud about a nettlesome case, he says: “There was something fishy about the butler. I think he was a Pisces, probably working for scale. I felt a thin shiver run up my spine as I sat down on the cold marble floor.” (A “woh-oooh!” is heard.) “What was it about this place? The atmosphere was as phony as the Tudor balustrade that leered at me from the top of the staircase, and there she stood, radiant. All those curves showing through that flimsy burnoose.”

Philip Baine Austin was born on April 6, 1941, in Denver and raised in Fresno, Calif. His father, Donald, was a railroad worker and a jazz musician. His mother, the former Priscilla Baine, was a drama teacher.

Young Philip seemed destined for Firesign Theater. “He began broadcasting by reading the funnies over the air while still in elementary school and continued to create comedy and political satire on tape with high school friends,” David Ossman, another member of the group, said in an email.

Mr. Austin won a two-year fellowship to Bowdoin College in Maine, then attended the University of California, Los Angeles.

Joined by his future Firesign partner Phil Proctor, he performed with the Center Theater Group in Los Angeles. As literature and drama director at the radio station KPFK-FM, he met Mr. Ossman and Peter Bergman. Mr. Ossman was 30; the rest were still in their 20s.

In his email, Mr. Ossman quoted Mr. Austin as recalling how he got his start in show business: “I got a job in a radio station because I could always do that with my voice — could make you believe that I was committed to the words coming out of my mouth. I mistakenly believed, therefore, that I was an actor. I’m not. I’m a musician. Interesting that it was the sounds of the words that got to me most. The Firesign Theater was the vehicle that allowed me to make that discovery.”

The four first performed together in 1966 on Mr. Bergman’s show “Radio Free Oz,” which Mr. Austin produced. They recorded about 20 albums as the Firesign Theater.

The group played major venues nationwide, including Carnegie Hall, Town Hall and the Beacon Theater in New York, in the 1970s. Later, benefiting from a tide of ’60s revivalism, it staged a comeback. The last Firesign Theater album, “Bride of Firesign,” was released in 2001. The group’s final live show was in 2011. Mr. Bergman died in 2012.

In addition to his wife, the former Oona Elliott, Mr. Austin is survived by a sister, Cathy Andreasen.

Mr. Austin also wrote for and performed on the radio program “The Daily Feed,” provided voice-overs for commercials and published an audiobook, “Tales of the Old Detective and Other Big Fat Lies.”

“Phil Austin’s goal,” said Frederick C. Wiebel Jr., the author of “Backwards Into the Future,” a 2006 book about the group, “was to fool people into laughing by looking at themselves and their beliefs and shaking out the truth.”

Mr. Austin was once asked if he had any great wisdom to impart. He replied: “Wisdom is not my strong point. I have been known to have a couple of good ideas and get a couple of laughs here and there. I think that’s more than enough.”
Posted by Harry at 7:24 PM

This place is stunning. The architecture of event spaces is beautiful and the decoration is spectacular. Environment was transparent and resonant and warm and immediate. I loved this place and my experience here was very exciting.