Pequot Museum - YES! - You can keep the Casinos.

The only time Jody and I went to either casino was to spend an afternoon in what Muther describes as Foxwoods' "surprisingly thorough three-level off-site museum documenting the Pequot tribe from the 16th century to the present. The architecture of the museum is stunning and the dioramas, which are generally terrifying and creepy in other institutions, are realistic."

Earlier in the article he refers to "enticing electronic bleeting." The only time we actually entered any casino was in Atlantic City. We had to pass rooms full of slot machines to reach the theater for a WHEEL OF FORTUNE audition. Muther's "electronic bleeting" was anything but "enticing" to me - it attacked my ears and nervous system, making me want to run out of the place screaming, covering my ears. Yech!

"Yech!" is my reaction to just about everything else described in this article, other than the museum. We never went to the casino during our day at Foxwoods. It was home to museum, then home, satisfied. 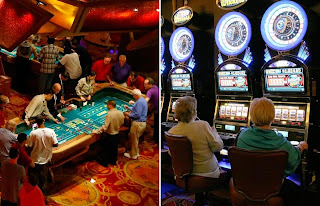 Mohegan Sun, left, and Foxwoods casino both have a lot to offer

UNCASVILLE — “What’s the matter, kid? Someone flush your goldfish down the toilet?” the woman seated next to me asked as I half-heartedly hit the “Repeat Bet” button on my slot machine at Mohegan Sun.

I was unaware that I looked like an Abilify advertisement until she pointed out my slumped shoulders. I explained that I couldn’t get tickets for that evening’s Justin Timberlake concert.

“You poor thing,” she said, giving me an eye roll. “I’m sure in some universe this is a problem, but not in mine. Get over yourself.”

She was right, as women who smoke menthols between sips of White Russians in casinos at 2 p.m. often are. I had a weekend to explore Mohegan Sun and Foxwoods, and there was plenty happening at both mega-casinos. I refused to cry a river over Justin.

I’ve been to Mohegan Sun plenty of times, but never stepped foot in Foxwoods, which is just 15 minutes away in Ledyard.

I’ll confess that I am partial to Mohegan Sun. For the past 10 years I’ve had incredibly memorable experiences there, such as the time Charo jumped me and tried to take my shirt off during her Christmas show. Her talon-like fingers furiously opened buttons over my objections as she sang “Mamacita, Donde Esta Santa Claus?” True story. Feliz navidad!

My initial impression of Foxwoods: It looked like a mall built in the late 1980s that underwent multiple expansions. These new sections don’t aesthetically match. Some are beautiful, others a bit sad. It’s like a quilt stitched by a well-meaning but color-blind aunt. Also, the endless maze of corridors connecting all the casinos, entertainment venues, and restaurants are so unwieldy that I suspect even Google Maps would have a difficult time navigating it all.

For someone looking simply to gamble, Foxwoods is the winner. It has 340,000 feet of gaming space, Mohegan only 300,000. The effect of both casinos is the same: Alien spaces filled with busy patterned carpets, mesmerizing lights, and enticing electronic bleeting. Walking through both provided a fascinating look at human behavior. There were seniors sporting cotton candy-textured coiffures robotically playing slots. Nearby men in their 30s, who looked like they stepped off the set of “Entourage,” filled the gaming tables while young women tugged at their micro skirts while they stumbled through the halls late at night after one libation too many.

Both casinos sit like a pair of unlikely monoliths in the middle of the woods in the southeastern part of the state. Mohegan Sun is owned by the Mohegan tribe, Foxwoods by the Pequot tribe. Foxwoods is the largest casino in North America. Mohegan is its hip little brother. Both have restaurants, stores, arenas, pools, spas, and gyms. Tens of thousands of gamblers and party-lovers make the trek down here every weekend.

Another reason why I preferred Mohegan over Foxwoods is the lack of natural light. Foxwoods had more windows in the gaming areas. Let’s face it, no one is all that pretty after a nicotine and rum-scented day of gambling. We all look better in dim, ambient lighting.

Food selection at both casinos is made up of sit-down fine dining options, mid-price eateries, and quick bite options. Mohegan wins this round because it has the only Krispy Kreme doughnut shop left in New England. 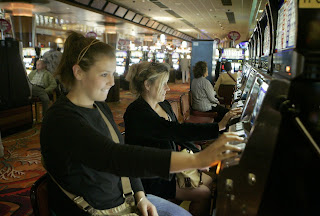 My failure to get Timberlake tickets gave me unwelcome time to make these observations. I started my Connecticut casino weekend by dropping in on a Friday rooftop party at Mohegan. It’s more glamorous than it sounds. The roof deck was on a parking garage. The entertainment was a Rolling Stones cover band. The lead singer of the band looked like Mick Jagger from a distance (particularly when I squinted), and the bargain drinks put everyone in a good mood.

Downstairs, doo-wop stalwarts Little Anthony and the Imperials were playing in a lounge called the Wolf Den. Anthony still sounded good given that he’s been performing for more than 50 years. I started getting uncomfortably angry toward all the Timberlake fans filing into the casino, so I traveled to Foxwoods to see four of the Wayans Brothers perform stand-up in the posh Grand Theater. I was so tired trying to find my way out of Foxwoods afterward that I had to stop for gelato and directions.

Another of the advantages that Foxwoods has over Mohegan is a surprisingly thorough three-level off-site museum documenting the Pequot tribe from the 16th century to the present. The architecture of the museum is stunning and the dioramas, which are generally terrifying and creepy in other institutions, are realistic. Foxwoods also has hiking and running trails just outside the casino. It’s a nice change to see a casino encourage outdoor activity.

I spent my second day in Connecticut exploring the $225 million museum, and giving Foxwoods a second chance. Perhaps my initial reaction was too snippy. I roamed the gaming tables and the endless hallways. What I noticed was a good selection of stores plopped haphazardly throughout the complex, rather than logically organized. I stayed in the luxe Fox Tower at Foxwoods that night. The hotel was beautiful, but seemed disconnected from the rest of the complex. 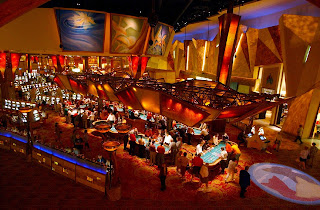 The Casino of the Sky at the Mohegan Sun.

Back at Mohegan — yes, you can hop between casinos all day long — I saw Adam Lambert with Queen and found a friend at the craps table who walked away at the end of the night with $800. I think my winnings at the penny slots totaled negative $63.

But my purpose at casinos is not gambling, which is why I always examine the entire complex. I look at it as an anthropological experience, and the Petri dish of humanity is what draws me. I can’t think of other places where I’ve seen busloads of Chinese gamblers alongside hip clubbers, high rollers, fans of slightly washed-up 1970s pop acts, and those willing to spend big bucks to see comedians such as Jerry Seinfeld. I’m there to see all that, plus the Dalíesque shenanigans of Charo, Krispy Kreme doughnuts, and, perhaps, next time, Justin Timberlake.

Christopher Muther can be reached at christopher.muther@globe.com.
Follow him on Twitter @Chris_Muther.
Posted by Harry at 12:26 AM