This post is labeled "Harry (personal)" - it's very personal!

Rest in peace, my dear friend. During the four years covered by these yearbook pictures, we wouldn’t have used that phrase. “Buddies,” yes, “wild and crazy friends,” sure, but “dear” wouldn’t have occurred to us. I have so many wonderful memories of Terry, who taught me to be my own man and march to my own drummer (although wearing his big brother Jimmy’s patent leather shoes in no way compromised that individuality!)

I’m sorry I won’t be able to make it to New York for the wake or funeral, but I send love and condolences to Linda and all of Terry’s family and friends.
The Senior picture on the right, and the one on the bottom with Terry's predictions, are from the 1965 Highlander, yearbook of Highland Falls, NY (now O'Neill) High School.

The picture to the left is Terry as a Freshman, from the 1962 Haldanian, yearbook of Haldane High School in Cold Spring, NY. The two below that are Terry as a Sophomore, and then Junior, at HFHS. (Kids from Garrison were bused to Haldane in our Freshman year, then to HFHS since our Sophomore year. Now Garrison students can choose.)

Terry Lee Ridpath, 67, of Garrison, passed away in Naperville, IL on Saturday, August 2, 2014, while doing what he loved best – spending time with his grandkids. 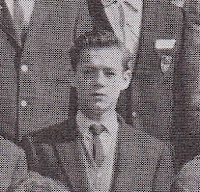 Terry was raised in Garrison, and was the son of James Thomas and Mildred (Janakovich) Ridpath. He married the late Audrey P. (Stubing) Ridpath on July 2, 1965, and they spent 47 wonderful years together.

As a retired Captain from the Putnam County Sheriff’s Department and a U.S. Army veteran, Terry was currently involved in a variety of organizations, including the Fraternal Order of Police Stephen P. Driscoll Memorial Lodge #704, the local Veterans of Foreign Wars (VFW), and the American Legion. He was also a drivers’ education instructor for the AARP.

He is survived by his two daughters; Leigh Ridpath Lau of Brooklyn, NY, and Cheryl Conway of Naperville, IL. He is also survived by five beautiful grandchildren: Sadie, Katherine, Skylar, Eleanor and Hudson. Additionally, he left behind a sister, Linda Ridpath Guerra, a nephew, Billy Guerra, and two wonderful son-in-laws, Sherman Lau and Chris Conway.

In lieu of flowers, the family has asked that contributions be made to Rosary Hill in Hawthorne, N.Y.

As the hospice facility that took care of his beloved wife during her battle with liver cancer last year, Rosary Hill held a special place in Terry's heart.

The family will receive friends at the Clinton Funeral Home, 21 Parrott Street (corner of Parrott & Pine St) in Cold Spring, on Thursday, August 7th, from 5 to 8 p.m.

A Mass of Christian Burial will be offered at 10 a.m., Friday, August 8, 2014, at Our Lady of Loretto Church, 24 Fair Street, Cold Spring. The burial will take place at St. Philip’s cemetery in Garrison.
Posted by Harry at 4:42 PM