When I saw this article in Friday's Boston Globe I immediately thought of the Brockton Symphony Orchestra's own Renaissance Man, Dr. Mark Finklestein.

Mark is an esteemed physician who somehow finds time to play several instruments in the "BrSO," serves on the Board of Directors, and writes the extensive Progam Notes that inform concertgoers of the personal stories and musical significance of the composers and pieces of music.

He is also a Grand Benefactor of the Orchestra, putting his money where his mouthpiece (or reed) is.

Greater Brockton is blessed to have Mark Finklestein, just as Greater Boston is blessed by the physician/musicians described in the article below. 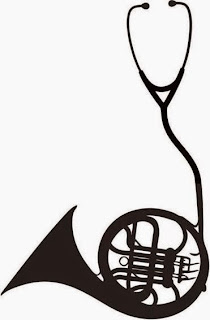 ANDRIS NELSONS, the young new conductor of the Boston Symphony Orchestra, recently performed at the Tanglewood Gala Opening concerts. Listening to the exquisite performances, I was struck by the number of physicians and scientists in the audience. Music and medicine are twin passions, and I wondered: Do data exist that underscore a link between these seemingly disparate worlds? Why should the fields be closely linked? Might a connection explain Boston’s being a world-class city for both music and medicine?

It turns out that the BSO tracks specific data linking music and medicine. Roughly one-fifth of the audience for winter season BSO concerts consists of MDs or PhDs. Moreover, physicians and scientists are similarly overrepresented on the board of the orchestra. The current president of the BSO, Paul Buttenwieser, is a practicing psychiatrist and an excellent pianist.

Curiously, the converse is also true: Many more physicians have been trained musically than in the general population. According to the work of Harvard Medical School professor Alan Steere, over 70 percent of doctors have received musical training. Many physician musicians in Boston have found their home in the all-doctor Longwood Symphony Orchestra. This includes Harvard Professor Leonard Zon, the internationally recognized stem cell researcher and LSO’s principal trumpet player for 30 years. Other physicians, such as psychiatrist Richard Kogan, have found creative ways to blend their medical profession with their musical avocation. Kogan presents lectures on the mental illness of famous composers, and then performs their works.

Why are music and medicine so closely linked? Harvard Medical School professor Lisa Wong is president of the Longwood Symphony Orchestra. She has written the book “Scales to Scalpels,” in which she describes fascinating physician musicians such as Terry Buchmiller, a pediatric surgeon at Harvard-affiliated Children’s Hospital.

Buchmiller majored in music and was concertmaster in college; she has subsequently served on occasion as concertmaster of the Longwood Symphony. Buchmiller compares musical and surgical training: “What makes you a great musician? You have to break things down, repeat them, practice them over and over . . . and then take a step back and put the emotional and mental pieces together to make it into a whole. It’s the same with being a great surgeon. There are many little pieces, many tiny skills that you knit together in ever-changing ways . . . Think about suturing. You’re tying the same tiny knot over and over, and every one has to be perfect because someone’s life is on the line. You’re saving a life one tiny knot at a time . . . that kind of repetition, experimentation, and exploration ingrained not only a skill, but a whole pattern of thought, a whole structure for approaching the world.”

Both music and medicine require dedication, discipline, and creativity. The author Malcolm Gladwell famously calculated that 10,000 hours of practice were required to become excellent as a musician. Similar dedication and discipline are certainly required to become an excellent physician. However, to become truly world class in the art of music, or the art of medicine, creativity is also imperative. Creative insights permit the best physicians to treat the most difficult diseases. Inspiration is similarly required of musicians to reveal the deep inner beauty of music.

Boston benefits from the close connection between music and medicine. It is not a coincidence that one of the world’s great medical schools, Harvard Medical School, and one of the world’s premier orchestras, the Boston Symphony Orchestra, are both located in the same city. Our region attracts the very best musicians and physicians in the world. In fact, in many cases, there is significant overlap amongst these physicians and musicians. These two worlds enrich each other, and all of us.

Dr. Christoph Westphal is an amateur cellist and physician/scientist. He is a Boston-based biotech entrepreneur and serves on the boards of Harvard Medical School and the Boston Symphony Orchestra.
Posted by Harry at 9:53 PM